With less the 30 days to go until race day, my nerves are starting to get to me and not without reason….  The last 30 days have seen 2 races, a lot of triumph and a little set back…

Lets rewind a bit.  I got sidelined by sickness for almost a week and a half!  I was devastated when I was forced to deviate from the training plan.  I had promised myself that I wouldn’t break from the schedule and here I was sitting out for a week and a half.  I worried about about losing fitness.  I worried that I wasnt building my mileage.  I was just all around worried.

I was also had a race coming up…  the Discover Hicksville 5mile Race.  I knew that my focus had to be on getting healthy so that I wouldn’t miss this race.  I was able to get 3 miles in a couple of days before hand and away we go!  The course was advertised as a “Flat” course.  I was excited for an easy race.

They offered a free fun run, so the boys got to join in the fun! As soon as they said “GO!”, Ben was GONE!!!  He ran the whole 1/4 mile by himself.  He made all the turns on the course and even waved to some of the people that were cheering!  The best part….  he got to the finish and STOPPED!  We had never told him what a
race was, but he instinctively knew what to do. He finished in less than 3mins and 40secs.  Alex didn’t love the process as much.. he was more upset about the numbers pinned to his shirt and just couldn’t get in to the running part of the race.  Both boys earned medals for their attempt.  For the next two weeks Ben kept asking, “We go race?”  I think I might have a natural runner on my hands. 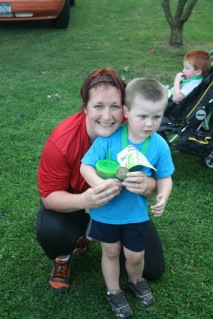 My race on the other hand, was not as easy.  The “flat course” was filled with little inclines and declines and there were lots of twists and turns.  It was hard to judge distance and pace.  It was also HOT!  It was a

relatively small collection of runners and they were all FAST… I… am SLOW.  I really just didnt want to be last.  I started towards the middle of the pack so I wouldnt be in the way of the contenders, but not at the back because I didnt want to start last!  The end of the course was twisty with a hidden finish.  It was hard to judge from a distance what your finish time would be since you couldnt see the clock until the last 100 meters.  I was stoked when I rounded the corner and I was trudging

I was thrilled.. my legs were jelly.. and it was done!  However, sprinting and staring at the clock with a race photographer that isn’t sitting at a good angle, makes for a not so pretty race picture…  But hey.. it was a PR! 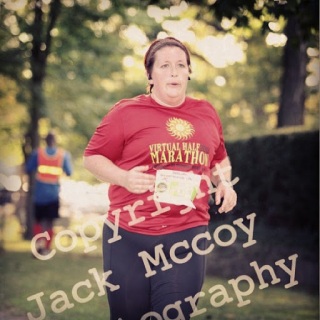 Back on track after the 5mile race it was time to shift my focus to getting ready for the longer distances.  It was on to 8miles, and 9miles!  Saturday long runs have become a family event with the boys dropping me off at the beginning of a local bike path and picking me up at the end, usually with dinner in hand!   I was able to push through 8miles and had a surprisingly wonderful 9mile run.  I felt in control.  I did walk a bunch, and I am ok with it.  I know that I will be walking during the 1/2 marathon, so I might as well prepare myself!
This past weekend, I had my 2nd race…. the Zombie Race.. 3.12 miles of insane trails, 13 muddy and tough obstacles, and ZOMBIES waiting for you around every turn!  The whole experience was epic!  I was able to complete all but one obstacle (the old school rope climb).  One of the hills was so steep that there was a rope tied to a tree to give assistance.. there were walls, and mud pits, slides, and fire..  it was a great test of strength, endurance, and courage…  My unofficial goal was to finish in less time than I had the Spartan race (1:48) and we finished in 1:18! 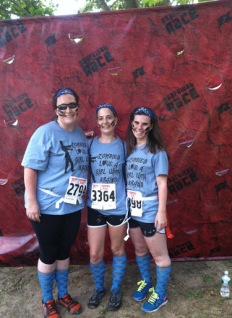 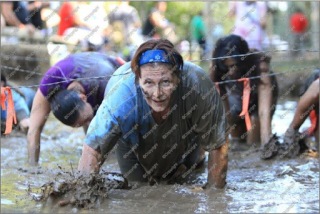 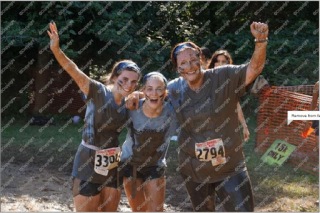 Now that I have wrestled with the Zombies, it is time to go back to the mundane..  next up… tomorrow: 10miles and next weekend, the NYC 10k!

I think more important that the running this week was the decision that I have made to turn this run into a fundraiser.  I will be running to benefit the children of Variety Child Learning Center.  Please check out the info!
A Variety of Miles Fundraiser