I started the pre-requisite research and got the equipment that I didn’t have.  Went to the store and bought Ball Jars and lots of strawberries and blueberries and mangoes and raspberries and a giant watermelon!

My secret….  using the recipes in the “Ball Blue Book Guide to Preserving“.  No one would ever know that these were not time honored recipes from a tattered and handwritten cookbook that was passed down through generations of ____________ (fill in the blank with one the of many family names here).  This would be how I would make my millions!!!

And…. jam was made.  It was made in great quantities.. There was strawberry, and blueberry lime.  There was mango raspberry and watermelon.  The process was simple.  But… it was JULY!  My kitchen is a postage stamp of real estate in an apartment that feels smaller everyday.  I have no exhaust fan over my stove. I had to do most of my cooking for the jam at night after the boys had been put to bed for fear of them testing out their super hero climbing skills and toppling the large vats of boiling sugary goodness!  All of these factors, in the dead of summer, made the jam factory of my kitchen a terrible place to work..  I found myself counting every finished jar twice hoping they would multiply and I would hit my production goals quickly!  When I found that I was finished… I had my own personal ticker tape parade in my head….

Fast forward to a burgeoning spring day in April… A trip to the pantry to get a fresh jar after finishing some blueberry lime jam earlier in the week.  I was shocked!!  The very last jar of jam was in my hand.  All of the fruits of my hard labor had reached their final jar opening.  I was surprised at the emotion that I felt, setting out the bread, the peanut butter, my opus.  Does this mean that I have lost my title as Jam Goddess?  Are my dreams of being a Jam-millionaire never to be realized?  Will the Ball jars rise again to be refilled?? 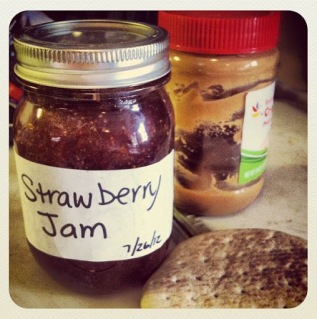